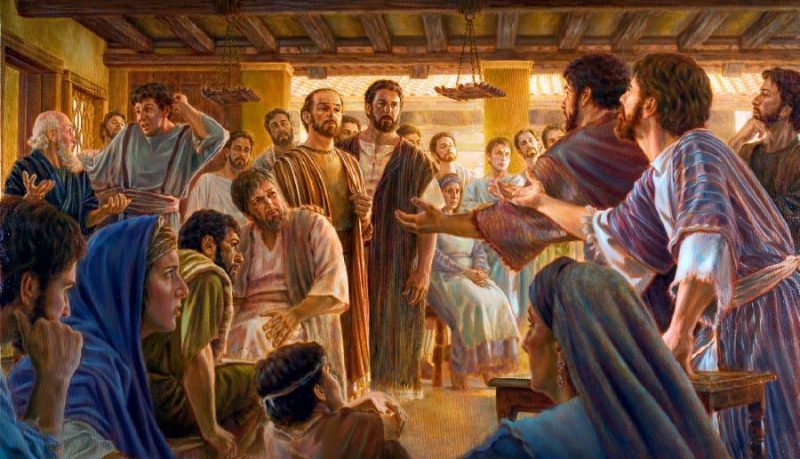 Titus does not appear by name in the book of Acts. Yet Titus was one of Paul’s most trusted co-workers and companions as well as a great friend as Galatians 2:1-5, 2 Corinthians 7:13-15, Titus 1:1, 1:4-5 along with others show. Paul calls him “my true child after a common faith” Titus 1:4. Thus indicating his special relationship beginning with baptism and continuing through joint and dispatch efforts.

Acts 15:2 Therefore, when Paul and Barnabas had no small dissension and dispute with them, they determined that Paul and Barnabas and certain others of them should go up to Jerusalem, to the apostles and elders, about this question. This “dissension & dispute” concerned the Jewish Christians demand for Gentile Christians adherence to certain Mosaical laws. One of these laws concerned circumcision. Titus would be the test case in this discussion taking place in Jerusalem. Galatians 2:1-5 Then after fourteen years I went up again to Jerusalem with Barnabas, and also took Titus with me. 2 And I went up by revelation and communicated to them that gospel which I preach among the Gentiles, but privately to those who were of reputation, lest by any means I might run, or had run, in vain. 3 Yet not even Titus who was with me, being a Greek, was compelled to be circumcised. 4 And this occurred because of false brethren secretly brought in (who came in by stealth to spy out our liberty which we have in Christ Jesus, that they might bring us into bondage), 5 to whom we did not yield submission even for an hour, that the truth of the gospel might continue with you. It certainly seems incredible Luke fails to mentions Titus by name in the book of Acts even though he figures prominently in the argument which would linger in the church for many years to come.

Nothing is heard of Titus for several years. The early church in Corinth was struggling and Paul dispatched Timothy 1 Corinthians 4:17. The problems concerned the transition from paganism to Christianity, chiefly the problem of immorality and allegiance to various teachers of God’s word seen in chapter one. While Timothy is mentioned once Titus not less than 8 times in this epistle and was ultimately effective 2 Corinthians 12:18f.

At Corinth, Titus is able also to organize the weekly collections for the poor saints in Jerusalem (compare 1 Corinthians 16:1-2 and 2 Corinthians 8:6). Between the first and second letter to the Corinthians, Titus is able to bring news of the progress, yet there is still need of his ability to deal with difficult problems and or people and we find him apparently carrying the second epistle, 2 Corinthians 2:3ff, & 7:8ff. Paul’s concern for the souls of all at Corinth was so strong that he came to Troas to meet Titus who was not there. Though a door was open to him there he moved on toward Corinth into Macedonia in order to meet him even sooner. His anxiety is relieved when they meet and Titus refreshes Paul’s spirit, 2 Corinthians 7:6-7.

Some time has passed and we see Paul is liberated from his first Roman imprisonment and continues on a number of missionary journeys. Titus is with him when they arrive on the island of Crete. Paul leaves him there to “set in order the things that were wanting,” Titus 1:5. The church there has a strong need for godly men in leadership role and Titus is tasked to fulfill the need. Crete has a reputation Titus 1:12 One of them, a prophet of their own, said, “Cretans are always liars, evil beasts, lazy gluttons.” Paul is aware of this reputation and places great confidence in Titus’s proven ability, seen in Corinth, to set these in order.

Paul plans to winter in Nicopolis, and from there he writes Titus telling him how the church should be governed, and to encourage every age to contribute to the effort of the gospel. Within forty years the gospel had spread to all parts of the Roman empire. Due in great part to the efforts of Paul the Apostle and to men of little renown like Titus. Men and women share the good news of Jesus the Christ through out the known world. This has been the work of the church through out time. All is lost if Jesus is found not in the lives’ and accomplishment of mankind. Little of consequence is achieved in history without the Lord Jesus to guide the way. This glimpse into the life of this Christian can spur us on to fulfill the work of Jesus. Certainly, the little know work of so many have come together to build the Lord’s church throughout the ages. Let us each one shoulder our responsibility as our Lord Jesus shoulder His for the furtherance of the will of God.