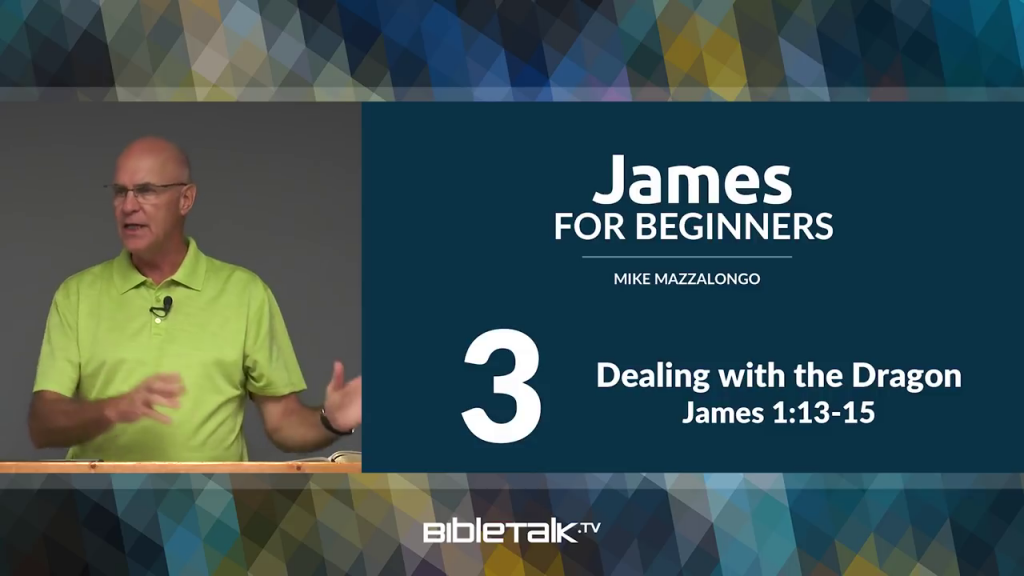 James: Dealing with the Dragon

Sin is everybody’s problem and in this lesson Mike reviews the true tested method that James provides to successfully deal with the everyday temptations to sin.

In the previous chapter I said that one of the features of the Christian lifestyle was the way Christians dealt with life’s trials. James teaches that believers meet these with joy because they realize that when God tests our faith through trials, and we are able to endure these patiently, it demonstrates that our faith is sincere. If our faith is found to be sincere it also proves that our love for God is true. This realization, in turn, produces greater assurance (hope) of our eternal reward.

James lays out the process that God uses to produce joy in the heart of a Christian:

Faith eventually leads to trials, trials (if suffered with endurance) confirm the genuineness of our love which strengthens our hope/assurance which creates and increases our joy resulting in a stronger and deeper faith.

How a Christian Deals with Temptation

Let no one say when he is tempted, “I am being tempted by God”; for God cannot be tempted by evil, and He Himself does not tempt anyone.
– James 1:13

The word “temptation” can refer to two different things: to seduce, solicit or encourage to sin; or it can refer to an exam, to be tested. God allows us to be tempted by evil but it is not He that sends the evil. Why?

God is not subject to evil desire. For example, pride is the sin of thinking more of ourselves than we actually should. God is all powerful and eternal, so it is impossible for Him to think more highly of Himself because He already is in the highest possible position. Another example is the sin of greed. Greed manifests itself in constant dissatisfaction with what we already have causing us to always want more (this afflicts rich and poor alike). God created and owns everyone and everything, therefore it is impossible for Him to be dissatisfied or want more. He possesses all things.

God does not tempt anyone to evil with evil in order to test faith or prove loyalty. The devil tempts with evil to evil, and God permits it but does not originate it. Again, the question, “Why?” The simple answer is that God is love (I John 4:8). He wants the best for us, and both sin and evil are not of love. Evil and sin destroy man. God is life and does not want man to die. Therefore, God does not tempt with evil because there is only good in Him, and He wants only what is good for us.

The point here is that when something evil is before you or you are involved in something immoral, something that looks bad, unclean or unholy, do not think or say that God is the One who put this situation before you. Also, do not claim that God is working things out in your life by sending this evil thing because God does not work in this way. He hates sin and does not tolerate evil.

The practical lesson to learn here is that when a Christian is confronted with evil and sin he has to realize that the enemy is near, not the Lord.

14But each one is tempted when he is carried away and enticed by his own lust. 15Then when lust has conceived, it gives birth to sin; and when sin is accomplished, it brings forth death.
– James 1:14-15

The first thing to realize is that temptation is not sin. We should not feel guilty when tempted to steal, lie, cheat, take unfair advantage, have impure thoughts, boast, be lazy or violent, etc. We sometimes surprise ourselves with the shameful thoughts that cross our minds. We can be tempted to do, say or think all manner of sinful things so we should not be too proud or surprised when this happens. Remember, even Jesus was tested by the Devil to dishonor Himself and God the Father. We need to feel guilty when temptation actually leads us to sin. The time we should feel guilty is when we actually disobey God.

How Temptation Leads to Sin (same for all)

But each one is tempted when he is carried away and enticed by his own lust.
– James 1:14

We become victims of sin because we allow ourselves to be drawn to the evil that we desire. Our flesh desires things, ideas, feelings and activities that are evil and immoral (made desirable because they are forbidden). Satan, through his agents in the world, offers these as bait to excite and stimulate the desire within us for these things.

Christians usually fall into sin when they fail to take action at the point of temptation.

Then when lust has conceived, it gives birth to sin; and when sin is accomplished, it brings forth death.
– James 1:15

Sin takes place when we pursue the evil that is attracting us until it eventually possesses us. Sin will control us if we let it. James says that once sin possesses us, it produces death (separation from God). If we do not take action and allow the bait to draw us in, we will be caught in the trap of sin. The trap that sin has is its power to control us. A good example of this is the story of Cain and Abel in Genesis 4:2-8.

2Again, she gave birth to his brother Abel. And Abel was a keeper of flocks, but Cain was a tiller of the ground. 3So it came about in the course of time that Cain brought an offering to the Lord of the fruit of the ground. 4Abel, on his part also brought of the firstlings of his flock and of their fat portions. And the Lord had regard for Abel and for his offering; 5but for Cain and for his offering He had no regard. So Cain became very angry and his countenance fell.
– Genesis 4:2-5

God accepted Abel’s offering which indicated that He accepted Abel and the life he was leading. Conversely, His refusal of Cain’s offering was the signal that He was also rejecting Cain’s life and actions. In my opinion, the rejection was not about the nature of the offering (animal versus produce) but the nature of the lives of the men who were offering the sacrifices. We see that Cain transfers the anger and resentment he feels towards God (and possibly himself) to his brother who becomes the object of his rage.

6Then the Lord said to Cain, “Why are you angry? And why has your countenance fallen? 7If you do well, will not your countenance be lifted up? And if you do not do well, sin is crouching at the door; and its desire is for you, but you must master it.”
– Genesis 4:6-7

God appeals to him first: If you do right you will feel better and be blessed. Then He warns him: Sin (anger, jealousy, wrath) is tempting him and he has to take action. What action? Recognize and acknowledge that the problem was not God or his brother, it was him. Pray for wisdom and strength to overcome. Get help from parents, even Abel. Let go his anger and hostility before it draws him into violence. Change the things in his life that led to his rejection by God in the first place.

In verse 8, Cain does not deal with the temptation in this way, he is “carried away” by his resentment and anger. He would rather kill than admit wrong, this is how completely he is trapped in his sin. When his sin finally possesses him it produces its final result: murder. Not just the death of his brother but the death of his own soul. If we continue reading we see how this separation from God affected his life. He was separated from God, his brother, family, society, even the earth itself since he could no longer farm.

From Adam and Eve to Cain, all the way to the Jewish Christians that James was writing to, and even to ourselves today, sin causes death and separation. The ultimate goal of Satan is to separate us from God and each other. Enticement to sin is his method. Lying is his tool (i.e. he told Eve there would be no consequences for her disobedience to God – Genesis 3:1-4). He seduced Eve to disobey thus spoiling with sin the perfect human nature God created. He led Cain to kill Abel thinking he would thwart God’s redemptive plan. Abel was righteous and called on God and was probably the one to carry the “promise” forward into the next generation.

How does a Christian today deal with the dragon? Practical applications for our everyday Christian lives:

1. Recognize that when temptation is near it is not from God, and that the enemy (dragon) is present.

2. When tempted, Christians need to take action: pray for strength and wisdom, seek help, change course or run away.

10For the love of money is a root of all sorts of evil, and some by longing for it have wandered away from the faith and pierced themselves with many griefs.11But flee from these things, you man of God, and pursue righteousness, godliness, faith, love, perseverance and gentleness.
– I Timothy 6:10-11

3. If a Christian does sin, he still must take action, but a different kind. He needs to acknowledge the sin, repent of it, reject this type of behavior, and return to the safe place of self-restraint and obedience.

If we confess our sins, He is faithful and righteous to forgive us our sins and to cleanse us from all unrighteousness.
– I John 1:9

Remember, both King David and Peter the Apostle took action after they sinned, and were thus restored. Ananias and Sapphira, on the other hand, continued to lie and died (Acts 5:1-6).