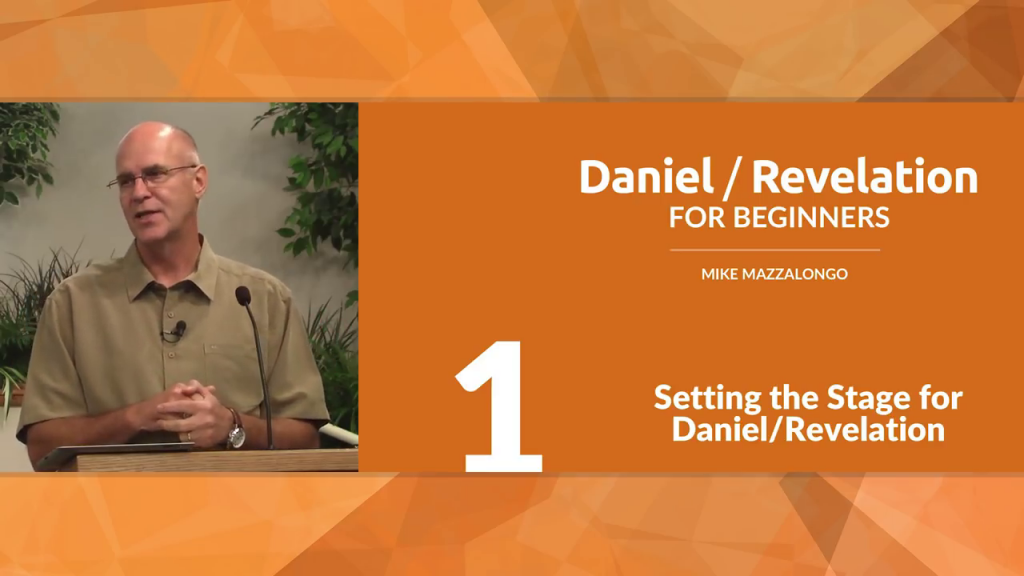 Setting the Stage for Daniel/Revelation

This series explains in simple terms the relationship between these two books of the Bible. Each book will be reviewed to better understand the meaning of the symbolic language used in both and the message that the writers were communicating to their readers as well as a modern application for today’s Christian.

This introductory lesson will situate the historical setting for the book of Daniel and its relationship to the Book of Revelation.

This is a study of the book of Revelation. Revelation is a book full of symbolism and imagery not familiar to the western mind. It was written in a style of writing called “apocalyptic.” The word apocalypse comes from a Greek word that means “an uncovering.”

The Apocalyptic literary style was used by Old Testament prophets when prophesying concerning world events. For example, the fall of a nation, great disasters, or God’s judgment.

There were several characteristics of this style of writing which were similar from one author to another:

When we begin our study of the book of Revelation you will recognize this type of language throughout. In our review of the period when Revelation was written you will note that it was a time of intense persecution for the Church from within as well as from outside forces.

Most scholars agree that John used this style of writing in this book in order to keep the Church’s persecutors (the Romans) from understanding its message. If you were not Jewish, if you had no knowledge of the Old Testament or Hebrew symbolism, you could not discern the true meaning behind the images and symbols.

We are in similar circumstances today. In order to understand Revelation, we must first review some Old Testament material where many of these images and references are found (over 400 references but no direct quotes). We also need to examine Jewish symbolism and numerology in order to get to the message behind the images.

Much of the information we need comes from the book of Daniel (although Ezekiel contains many of the same images).

And so, any serious study of the book of Revelation begins with an understanding of Daniel. Therefore, we will begin with Daniel and move to Revelation after we are finished.

Joshua led the Israelites into the land of Canaan (Israel) in approximately 1410 BC. For the next 300 years, they conquered the nations living there and established themselves.

In 1060 BC Saul became the first king of a united Israel (12 tribes). In 1020 BC David became king, subdued the entire land, and extended the borders of the kingdom from the Egyptian desert in the south to the Euphrates River in the north; from the Mediterranean sea in the west to the desert in the east. In 980 BC Solomon became king and for 40 years Israel enjoys a golden period of peace and prosperity during which the temple was built in Jerusalem.

After Solomon died, the kingdom was divided in two (940 BC):

The two were never reunited and competed for dominance in the region. After the split, there was a decline in moral and religious fervor in both kingdoms as periods of high and low fidelity to the Lord followed one upon another.

During Israel’s development from 1400 BC to its divided kingdom in the 9th century, the Assyrian nation dominated the world scene politically and militarily. Their capital was to the north, in Nineveh, and the Jews often had to pay tribute or fight off this strong and wicked neighbor.

In 722 BC the Assyrians attacked and destroyed the Northern kingdom and scattered the people throughout other nations and brought many into exile to Assyria. They also brought foreigners to live in the North and mix with the remaining Jews. The result was that the Northern kingdom’s population was mixed with foreign nations and lost its pure Jewish blood and heritage. These “mixed” Jews were eventually called Samaritans by the Southern kingdom and despised because of their mixed blood, their mixed religion (pagan/Judaism) and their collaboration with enemies against the South in times of war.

Meanwhile, on the world stage, a new power emerged to challenge Assyrian supremacy and in 612 the Babylonians destroyed Nineveh, the Assyrian capital, and established themselves as world rulers.

In 606 BC the Babylonian army led by future king Nebuchadnezzar captured Jerusalem and carried off the main leaders, nobles, and royalty to Babylon where they began 70 years of captivity which was the subject of prophecies made by Jeremiah in 626 (20 years before the fact).

Among the leaders and young nobles carried off at this time was a young man named Daniel who would grow in importance and prestige in the foreign king’s court because of his ability to interpret dreams and prophesy. Also taken away at this time was Ezekiel the prophet.

God allowed His people to be taken away into exile, but He provided for their spiritual needs: Daniel in the palace was influencing the king with his special gifts, Ezekiel lived among the people and ministered to them with his teaching and his prophecies.

Twenty years later, in 586 BC, after the king who had been left in charge of the Southern kingdom by the Babylonians rebelled (Zedekiah), the Babylonians returned to Jerusalem and destroyed the temple and the city and carried off even more Jews into captivity. The Babylonian system was to carry off the leaders and retrain them in Babylonian culture, religion and politics, and return these people (after 20-30 years) to their homelands to rule under their administration.

In 539 BC, the Medes conquered the Babylonians and the new world leader was a man called Cyrus who became king in 536 BC. In that same period, this king released the Jews to return to their homeland and provided them with help to begin rebuilding the temple and the city. During this time (534 BC) Daniel died while in captivity in Babylon, now controlled by the Medes.

From about 500 to 332 BC, the Medes shared world power with another mighty nation, Persia (Medo-Persian Empire).

It is during the reign of the Persian kings that the city of Jerusalem was completed, the temple was rebuilt, Ezra reestablished the Law, Malachi prophesied to the people who had resettled in Jerusalem, and Nehemiah returned to rebuild the wall (486-400 BC). Old Testament history ends in 400 BC with the work of the prophet Malachi. There are two other historic events that take place that have great significance for the world and also for the coming of Jesus and the spread of the gospel.

It is important to understand that there is a story within a story going on here:

The significance of this is important for several reasons:

And so we begin studying Revelation by studying the book of Daniel because its history, prophecy, language, and images relate directly to similar features in the book of Revelation.

The Book of Daniel was written by Daniel who was a young Jewish man from the upper classes of society in Jerusalem. He was carried off into Babylonian captivity in 606 BC and wrote this material between 606 and 534 BC when he died. His main abilities were in interpreting dreams, visions, and prophecy. His book was written in two languages (Aramaic and Hebrew).

Daniel is divided into three sections: